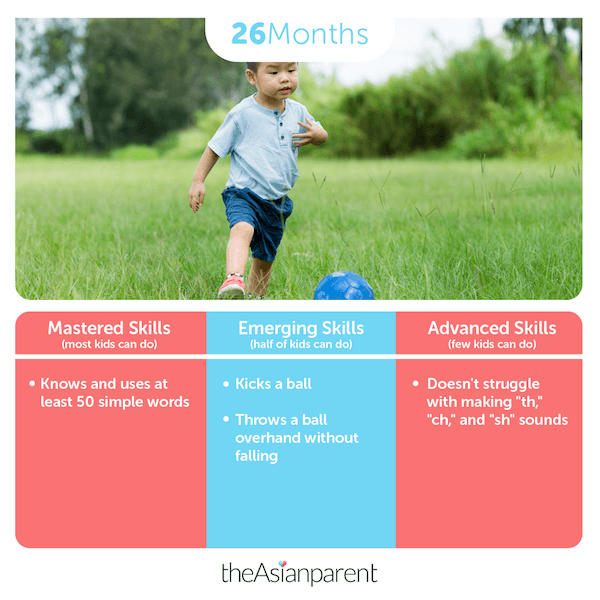 Get ready to sweat it out, mums, because you have a chatty and energetic 26 month old toddler running around the house now!

By this stage, you will notice that your little trooper is beginning to explore the world around him through play. This also means that he may get so engrossed in it that he might not even want a break for meals. Typically, by the 26th month, a toddler begins to start performing a bevy of physical activities.

All of these developments mean that you should prepare yourself for long days of play and running around. You’ll also have to be extremely patient in order to properly deal with your growing bub. He will have a lot of questions and do the same mistake many times.

But your patience and persistence can help him pick up activities and learn about objects and people around him, faster.

In rare cases, a 26 month old toddler may not be able to engage in a lot of physical activities. He may even avoid regular play. This could be a sign of delayed growth.

But more or less by the end of the second year, most kids are able to catch up with each other.

However, if you still notice something amiss in his activities, it’s best to consult with a doctor about his physical activities. He might be suffering from developmental coordination disorder called Dyspraxia that essentially leads to motor learning difficulty.

Your growing toddler is learning more about the world around him by touching, listening and looking at people and objects. This process is also more thoughtful for him now. As his grasp of language increases, so does his ability to form mental images and understand concepts and instructions.

As the days go by, this sequence will become more realistic, and he will continue his make-believe plays. He may even incorporate his daily routine — like getting up, going to school and playing with friends — into this kind of play. This can be quite a joyful experience for any parent.

When you look at your child’s development, remember that each child is different. No two kids grow up or develop the same way and the difference is sometimes just in months. However, in rare cases if your child doesn’t reach any of the above said milestones, its time to consult the doctor.

As happy as your toddler is all the time, get ready for some major tantrums and whining. On most days, you might find a cranky and grumpy toddler on your hands. Expect the following at 26 months:

When to See the Doctor

The only limitation for a 26 month old toddler is how to grasp complicated emotional concepts. He won’t understand that a parent is getting divorced or a family member is unwell. So be extra patient with him and make sure to comfort him at all times.

If he still continues to be angry and disruptive, it could be because he has a medical or neurological condition such as bipolar disorder or oppositional disorder. Consult your doctor in such a case.

For anything that goes wrong, he may think it’s his fault, and reasoning with a toddler at this stage is often difficult. Similarly, jokes about how he won’t get to play if he doesn’t finish his food will  go over his head. So again, patience is the key here.

Your not-so-tiny tot will also be able to describe objects by their name and may even recognise pain and its location in her body. | Image courtesy: stock image

As a brand new preschooler, your toddler can now form short sentences. But there is a lot more you can expect at this age when it comes to speech and language development.

Remember that there will be two languages at play at this stage. One is the expressive language, where he can speak on his own. Second is receptive, which he uses to demonstrate that he understand you. So keep this in mind when you deal with your 26 month old bub.

Every child is different. So while it may be tempting to compare to your child’s development to another kid, it’s best to avoid that. This gives your child an opportunity to come into his own.

However, if you notice significant differences such as not being able to follow any instructions, difficulty in answering questions or talking, you might want to head to a doctor.

These problems could be due to speech disorders or developmental disabilities such as autism spectrum disorders(ASDs) or cerebral palsy.

By the age of 26 months, your child is twice his birth-height. As a result of this growth, his chest circumference will be slightly broader than his head circumference now. But there is a lot more happening so here’s what you can expect.

As far as nutrition is concerned, get ready for some tantrums in the kitchen. An aversion to certain tastes will be noticeable. But to fuel his growth, make sure to provide him with the proper nutrition. Your growing child needs at least 1 1/2 cups of cooked rice, cereal or pasta (or any combination), 1 cup of vegetables, 1 cup of fruits,  2 ounces of protein (meat, fish or poultry), and 1 to 1 1/2 cups of dairy (milk, yoghurt or cheese) every day.

At this juncture, also keep a tab on his immunisations and vaccinations. By the 23rd month, your kid should ideally get his Hepatitis A vaccine. These are given as two shots and at least six months apart. If he hasn’t completed his vaccinations, speak with your doctor and complete the immunisation.

In rare cases, the 26 month old development and milestones differ due to slow growth and even aversion to food. Head to a doctor to understand why this might be happening with your tiny tot.

It could be the result of a avoidant/restrictive food intake disorder (ARFID), where a child avoids eating certain foods. But it could also be because your kid has turned into a fussy eater. So consulting a specialist is best at this point.

In the meantime, you can give extra attention and TLC to your 26 month old toddler. Spend time playing with each other and hear him out. All of these methods will help him develop his cognitive and motor skills faster, and he may even overcome any growth delays.