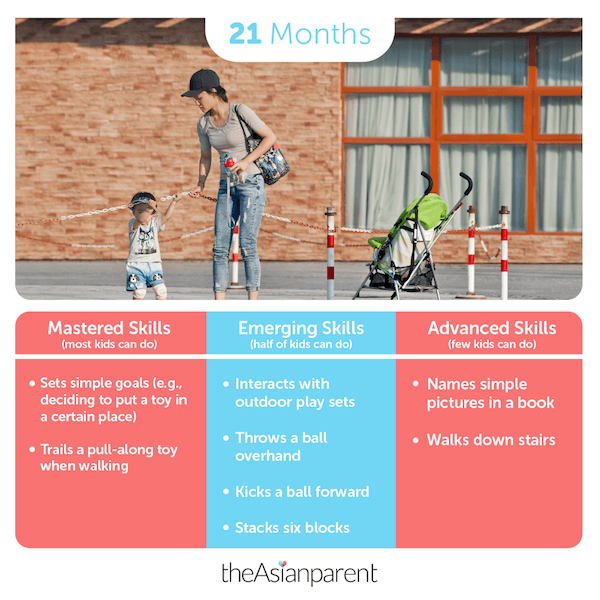 It's time to break out your routines again, mummy, because your tiny tot is beginning to plan ahead! With a little bit of warning and a smattering of kisses and cuddles you and he are ready to go on adventure.

Have you noticed that your tiny tot is beginning to take care of himself? He can wash his hands and his feet after playing outside. He can put on his own slippers, even though they might be on the wrong feet. He might even feed himself by now if you've shown him how.

Although it might seem as if he's always on the move, did you know your little one actually spends almost 20 percent of his waking time simply looking at things?

Play is by far the most important way your toddler learns. He has a short attention span, but loves to play games. He might even be able to do puzzles of three or four pieces if you have done them with him before.

His attention span may be short, but he is beginning to develop a sense of time. You could begin to talk him through the day, telling him what activities will be happening next. For instance, you could tell him that after lunch he will take his nap, and after his nap you will be going down to the playground.

Setting such expectations gives your little one an anchor in an ever-changing world. It makes him feel safe and secure. It is important that once you set a schedule and tell him, you keep to it as well.

As your tiny tot develops a sense of time, routines become increasingly important. Knowing what to expect make transitions from one activity to another go much more smoothly. For instance, a consistent bedtime routine of bath, teeth brushing, story and cuddle, relaxes your little one and helps him fall asleep.

This stage of toddler development is all about setting expectations – both your toddler's and your own! There are many ways to do this. You could talk him through the day's schedule and remind him throughout the day what will happen next.

Word acquisition is picking up speed! Once your tiny tot has the confidence to begin speaking, he'll be wowing you with his conversational skills. Last month, it was fifteen words. This month it's already up to twenty! But don't worry if you're getting the silent treatment. Speech is one of those developmental milestones that varies widely among toddlers.

Break out the cups, your little one is ready for sipping all by himself. He can also hold on to cups. He is still learning how far to tip the cup, so keep an eye on him if his cup doesn't have a lid.

Don't worry if it takes him a while to figure out how to use a straw. Some children catch on immediately, but for others, it can take weeks before they work out how to suck the liquid out.